DVS is an emerging public health concern where individuals experience a wide range of symptoms including headaches, eye strain, dry eye sensation and neck pain while navigating through their digital lives. Predictably, a growing trend in digital usage in the modern age has led to a steep acceleration of associated DVS symptomology (Rosenfield, 2016); therefore, it is critical to understand, measure and treat this problem appropriately. DVS could be caused by both ocular and extraocular anomalies. While ocular anomalies include uncorrected refractive errors, eye misalignments or dry eyes, extraocular anomalies include muscle strains due to compensating postural changes. Uncorrected refractive errors are typically corrected using prescription lenses, dry eyes are treated with therapeutics, and compensating postural habits are corrected by employing occupational therapy or better ergonomic habits.

An often-overlooked cause of DVS related symptomology is binocular vision disorders (BVD); for example, convergence insufficiency, where the patient typically presents with an eye misalignment (large exophoria at near compared to distance) coupled with other clinical signs such as reduction in near point of convergence (NPC). Typical treatment options for BVD involve prescription lenses, prisms or vision therapy (Scheiman et al., 2008). Lenses—especially plus lenses—are not commonly employed and are reserved for patients with heterophoria associated with a high AC/A. Prescription prism glasses, with horizontal and vertical relieving prisms, are offered to either patients with large phoria or in conjunction with vision therapy. The prism value prescribed is often based on fixation disparity analysis, Sheard’s criterion or Percival’s criterion. These glasses provide a constant prism correction to patients at all distances even though patients often present with varying amounts of misalignment at different distances.

Vision therapy is another commonly employed option for treating eye misalignment. The time course of the therapy and the treatment modality are decided based on the clinical (optometric) findings. The therapy, however, does not provide instant relief and is heavily reliant on the compliance of the patient over an extensive time course. Clinicians typically prescribe these treatment options only to symptomatic patients with large phoria. Clinicians tend to overlook patients with a smaller phoria and instead look for other causes for DVS.

There are several reasons why symptomatic patients with smaller phoria are not prescribed prisms or other corrective modalities to treat eye misalignments. One of the primary reasons is the inability to accurately measure smaller eye misalignments. As a result, only patients with a larger phoric posture are diagnosed and treated while individuals who could benefit from small prismatic corrections (less than 2PD) are overlooked. Clinicians have been testing phorias and fixation disparity subjectively for almost a century now, but it has been virtually impossible to accurately test prism in small increments of 0.10 PD for patients until the advent of the Neurolens Measurement Device (NMD) in 2018. There is a need to recognize the functionality and application of small prism correction. This paper will demonstrate how prescribing small amounts of horizontal prism (less than 2PD) can relieve symptoms commonly related to DVS. So, what do we know about the relationship between small eye misalignments and DVS symptoms?

Eye Misalignment and the Severity of Symptomology

One of the common misconceptions with binocular vision disorders is that symptomatic patients tend to exhibit large phoria or fixation disparity coupled with other clinical signs. The assumption is that these large eye misalignments reflect a breakdown of the binocular vision system, especially the accommodation (focusing) and vergence (aligning) mechanisms. However, several studies have consistently reported evidence contrary to this belief.

For example, data from the Convergence Insufficiency Treatment Trial (CITT) study from 221 subjects showed no correlation between the amount of exophoria and the severity of the symptoms of their patients (Bade et al., 2013). The Convergence Insufficiency Symptom Survey (CISS) score was also not correlated with the severity of the clinical signs such as near point of convergence (NPC) or positive fusional vergence limits (PFV). Simply put, the evidence suggests that the magnitude of clinical signs does not correlate with the severity of the symptomology. For instance, a patient with 1PD exophoria and a patient with 10PD exophoria with no other ocular or extraocular problems related to DVS might experience a similar magnitude of eyestrain and need to be treated appropriately.

Traditionally, eye alignment, i.e., phoria, tropia, or fixation disparity, is typically measured using clinical techniques that are subjective in nature. This results in poor repeatability, limiting a clinician’s ability to measure small eye deviations accurately. Patient attentiveness or the clinician’s level of expertise (Hrynchak et al., 2010) also affect the accuracy and repeatability of the test. For example, a previous study reported that the smallest phoria value that can be detected by clinicians with varying levels of expertise is about 2-3PD (Fogt et al., 2000). This would mean that any smaller misalignments may not be detected at all using traditional methods. The ability to track small and slow dissociated eye movements is also limited with the naked human eye. This introduces discrepancy in the dissociation time, ultimately affecting the accuracy of the misalignment estimation. A previous white paper provides insight into all the possible factors affecting the accuracy and repeatability of phoria/fixation disparity measurements. Simply put, the subjective nature of the procedures limit clinicians’ ability to accurately measure small eye misalignments. This would explain why there is no concrete literature on the impact of small eye misalignments on the subjective visual comfort and the benefit of correcting them.

DVS may not just be limited to the eye and could be much more complex, as this white paper posits in detail. Although the exact mechanism is unclear, the hypothetical pathophysiology suggests that eye misalignment leads to increased effort by the visual system to re-align to avoid double vision and strabismus. This constant effort to realign causes an overstimulation of the trigeminal nerve, which ultimately leads to an irritated nerve. This sensory irritation then results in painful stimulation of several parts of the eye, head and neck, leading to symptoms such as headache, neck pain and eye strain. Therefore, even small prismatic corrections of the misalignment could reduce the overstimulation of the trigeminal nerve and relieve patient’s symptoms, ultimately improving their visual comfort.

Neurolens: A Better Way to Diagnose and Treat Eye Misalignment 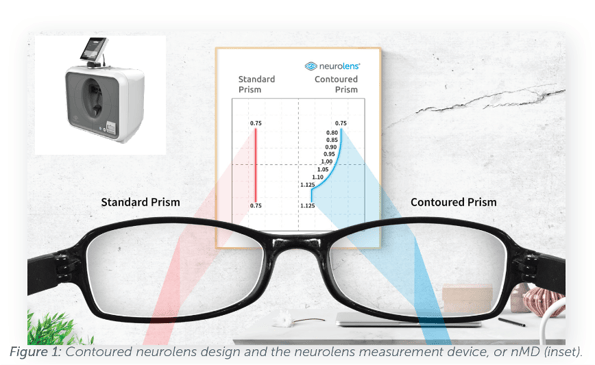 The NMD is an objective, accurate, precise, simple and efficient way to measure eye alignment and calculate a patient’s AC/A. The NMD does not rely on subjective responses, therefore eliminating both clinician and patients’ biases or variabilities. The objective measuring aspect of the NMD is achieved by employing an eye tracking system that robustly tracks patients’ eyes in a continuous fashion while the eyes are being dissociated and associated. The system can identify phoria smaller than 1PD and can detect changes as small as 0.1PD. The repeatability of the NMD is 0.53PD for distance and 0.86PD for near phoria measurements, which is significantly lower. This is better than 2.5-5PD reported with the traditional methods such as Von Graefe and modified Thorington (Goss et al., 2010). The NMD is simple in the sense that it employs an iterative procedure, which takes the misalignment measurements into account and provides a final Neurolens prism correction (Neurolens value). Unlike prescribing guidelines such as Sheard’s Criterion, Percival’s Rule or the 1:1 rule, the Neurolens value utilizes a proprietary algorithm that was developed based on patient outcomes across hundreds of thousands of measurements and outcomes.

The Neurolens value obtained by the nMD is used to prescribe Neurolenses, which provide a proprietary contoured lens design, as shown in Figure 1. This technology seamlessly varies the prismatic correction provided to the eyes at different distances, allowing clinicians to customize the lens correction for each individual patient depending on both patient needs and their clinical findings. The nMD provides a Neurolens value at the end of the measurement which corresponds to the distance prism prescription of the patient. Clinicians can readily use this value as a guideline to treat their patients. Unlike a standard prism, the Neurolens contoured prism design allows clinicians to treat their patients with a distance prism correction and additional correction at near. 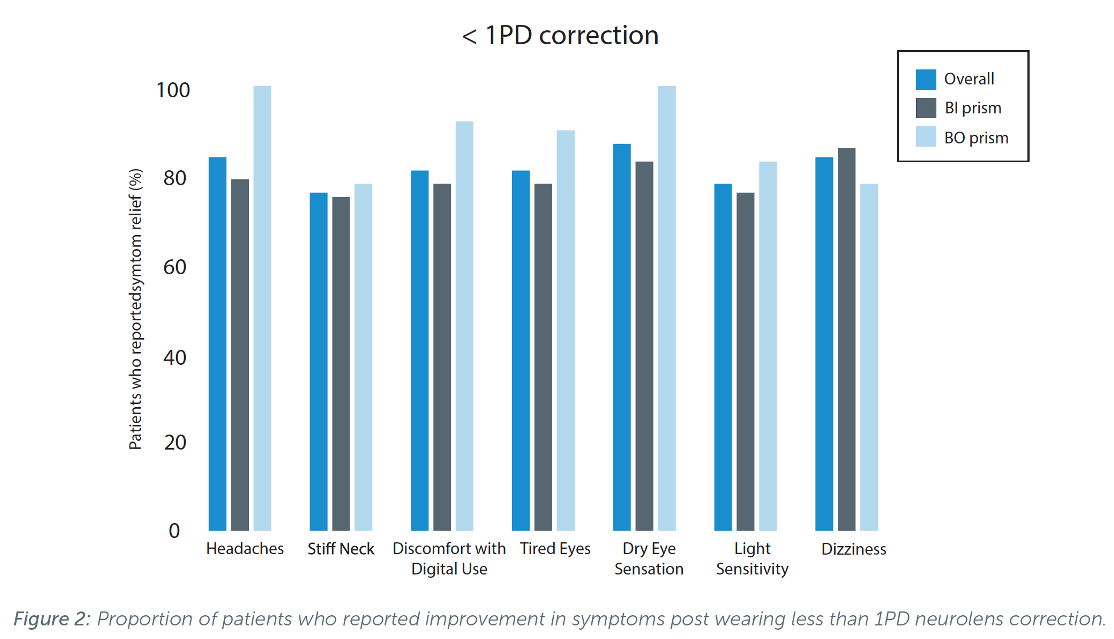 Across multiple clinical practices, Neurolens prism corrections of 1PD and 2PD prescribed based on the Neurolens value have proven very successful in delivering a very high level of symptom relief for patients with various DVS related symptoms, such as headaches, neck pain or discomfort with computer use (Lifestyle Index Survey). Patient survey results post 60-day Neurolens wear were collected from individual practitioners across the country.

Eye misalignments are one of common causes of DVS related symptomology. There is a common misconception that only patients with large phorias or fixation disparity associated with other clinical signs suffer from visual discomfort. However, there is abundant evidence that there is no correlation between the magnitude of phoria and severity of the symptomology. Commercial data collected by Neurolens clearly shows that patients who received small amounts of prism correction reported significant improvements in their DVS symptoms such as headaches, eyestrain or fatigue. The Neurolens Measurement Device (NMD) and Neurolenses, with customizable contoured prism design, provide a comprehensive way to accurately diagnose and treat Digital Vision Syndrome (DVS), allowing patients to lead a comfortable digital life.

Posted on Mar 3, 2021 7:19:41 AM
A patient complains of burning, irritated eyes, especially late in the day after working at the computer. Sounds like... 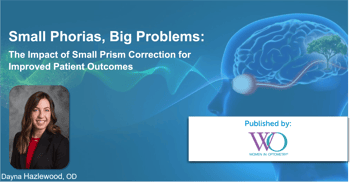 The Impact Of Small Prism Correction For Improved Patient Outcomes

Posted on Mar 3, 2021 7:19:41 AM
There is a common misconception that only patients with large phorias or fixation disparity suffer from visual... 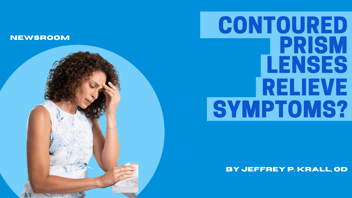 Posted on Mar 3, 2021 7:19:41 AM
Binocularity and trigeminal dysphoria go hand in hand. As digital device use grows, the symptoms associated with...