Digital Vision Syndrome and its Impact on Productivity

The modern digital lifestyle—coupled with a dramatic, COVID-driven shift to remote working and learning—has led to a dramatically-increased usage of digital devices for both leisure and work. In fact, in the US people are spending 8-12 hours a day on average using digital technology, including phones, tablets and laptops/desktops. This increase in screen time leads to an increase in the demand on our eyes’ accommodative and vergence mechanisms, which constantly try keep our visual percept clear and single. This increased demand (stress) when sustained could eventually lead to visual disorders which manifest as headaches, eye strain or tired eyes. This association between visual disorders and digital usage is commonly referred to as Digital Vision Syndrome (DVS), or Computer Vision Syndrome (CVS). Recent studies revealed that the majority of digital screen users have reported some degree of symptomology—including headaches and eye strain—which significantly impact their productivity.1 Although the symptoms associated with digital usage are typically temporary, they can cause significant, recurring discomfort that can have a significant negative impact on a person’s productivity. This person also may require frequent breaks and possibly even increased attention or oversight; both of which could further exacerbate the productivity challenges.2

One of most common causes of DVS symptoms are binocular vision disorders (BVDs) involving an issue with either the accommodative or the vergence mechanism. Typical treatment options for BVDs involve plus lenses, standard prisms (base in, out, up or down) or vision therapy. Traditionally, only symptomatic patients with considerable phoria and/or abnormally small fusion reserves were identified and treated for BVDs. There are several reasons why symptomatic patients with smaller phoria are often not treated. One of the primary reasons is the historical inability to accurately measure smaller eye misalignments. As a result, only patients with a larger phoric posture or reduced fusional reserves are diagnosed and treated, while individuals who could benefit from small prismatic corrections are overlooked. Further, prescribing guidelines such as Sheard’s Criterion or Percival’s Rule only identify symptomatic individuals with abnormally large phorias, reduced fusional reserves or both, while individuals who are considered to have “normal” phoric posture are either left undetected or treated for something else. Finally, there is a common, pervasive myth that the magnitude of phoria is correlated to the symptomology that an individual experiences.

Although it is standard practice for clinicians to measure eye misalignments such as phorias or fixation disparity, it has been difficult to accurately identify and treat phorias in small increments of 0.5PD or less until the launch of the Neurolens process in 2018. How has the advent of the Neurolens process transformed the treatment of BVD? What has the process of symptom identification, accurate measurement and novel treatment taught us? What clinical evidence is there that Neurolenses can relieve individual symptoms and improve productivity?

The Neurolens process is comprised of three basic steps: a symptom screener—otherwise known as a “lifestyle index”—is used to gauge a patient’s level of symptomology; the Neurolens Measurements Device (NMD) is used to accurately measure the patient’s binocular health and provide prescribing guidance that their doctor can readily use to prescribe a correction; and finally, contoured prism technology is used to treat the patient and relieve their symptoms.

The NMD is an objective, accurate, precise, simple and efficient way to measure eye alignment and calculate a patient’s AC/A.3 The NMD does not rely on subjective responses, thereby eliminating both clinician and patient biases or variabilities. The NMD is simple in the sense that it employs an iterative procedure, which takes the individual’s measurements into account and provides a final, outcome-based Neurolens prism correction—or Neurolens value. The Neurolens value obtained by the NMD is used to prescribe Neurolenses, which incorporate a proprietary contoured prism into the lens design. Unlike a standard prism, the Neurolens contoured prism design allows clinicians to treat their patients with a distance prism correction and additional correction base-in at near.

Commercial data collected by Neurolens from individual optometry practices across the country clearly showed that patients who received even small amounts of prism correction reported significant improvements in their DVS symptoms.4 Given the overwhelming evidence, it is safe to say that the Neurolens process provides a comprehensive but simple way to accurately diagnose and treat DVS, allowing patients to get both clear and comfortable vision. But, given that Neurolens technology reliably relieves these symptoms and the associated discomfort, can it also improve a person’s productivity?

Correcting eye misalignments—and particularly fixation disparity—has been demonstrated to lead to improvement in binocular distance and near vision.5 This has led to logical and prevailing assumptions that eye misalignments reduce the ability to perform daily tasks, especially at near. This obviously includes activities like reading a book or reading text on digital devices. Given this direct connection, it stands to reason that effectively correcting binocular vision with Neurolenses would have a positive impact on productivity. However, it is of course important to demonstrate this hypothesis and measure the level of impact more scientifically.

To achieve this, a rate-of-reading test was leveraged as a direct metric to gauge productivity level. To test the impact of Neurolenses on productivity, a double-masked parallel arm study was designed with two subgroups: Treatment and Control. Subjects who were identified as potential Neurolens candidates were randomly assigned into one of the subgroups. Each group consisted of 30 young adults. The Treatment group received a pair of Neurolenses with a prescription based on the practitioner’s Rx using the subject’s best corrected vision—and kept within half a prism diopter of the Neurolens value outputted from the NMD. The Control group received a premium single vision lens which yielded the best corrected vision for the individual. Reading speed was assessed initially using the Wilkins Rate of Reading Test (WRRT). This test enables rapid measurement of reading speed using text passages that have no semantic content and demand minimal word recognition skills.6

Other tests during this initial visit included measurements typically performed during a routine optometric examination, including visual acuities, refraction, slit lamp, BV evaluation and fundus examination. If the individual did not have any clinically significant abnormality in the eye that would impact their vision, they were randomized into either the Treatment or Control group. Every individual enrolled in the study wore the randomized study lens assigned to them for 7±2 days. Reading speed was then re-evaluated after the wear-in period. Of note, this reading test was only given to individuals who could correctly read the words at 40cms.

Each qualifying study participant was tasked with reading aloud all the words printed on a reading chart—as quickly as possible, without errors. The investigator randomly chose one of the four versions of the chart (chart A, B, C and D). An online version of the chart was also developed, programmed so that the test would automatically close one minute after initiating. As the patient read the chart, the investigator noted each error by marking the score sheet above the word that was misread. After the one-minute test was administered, the investigator marked the score sheet with an oblique line (/) to indicate how far the patient was able to read in the allotted time.

The investigator then calculated the number of words correctly read per minute for each passage. This procedure was repeated twice using two different versions of the test and the final reading speed measurement was ascertained by taking the average of the two measurements. Errors typically impacted the overall measured words-per-minute, either by reducing the number of words correctly read, or by increasing the time taken to read them. So, an improvement in the reading speed would indicate that the patient had more comfortable vision while reading the chart and made less errors when reading.

Of the 60 young adults enrolled into the study, 27 patients received the Control lenses and 28 received Treatment lenses—i.e., Neurolenses. Three patients were lost to follow-up. The two measurements taken at each visit were averaged and were compared between the two visits for all participants. ANOVA was used to assess the difference in the reading speed with the type of lens used (Control vs Treatment) and baseline reading speed as the two variables. 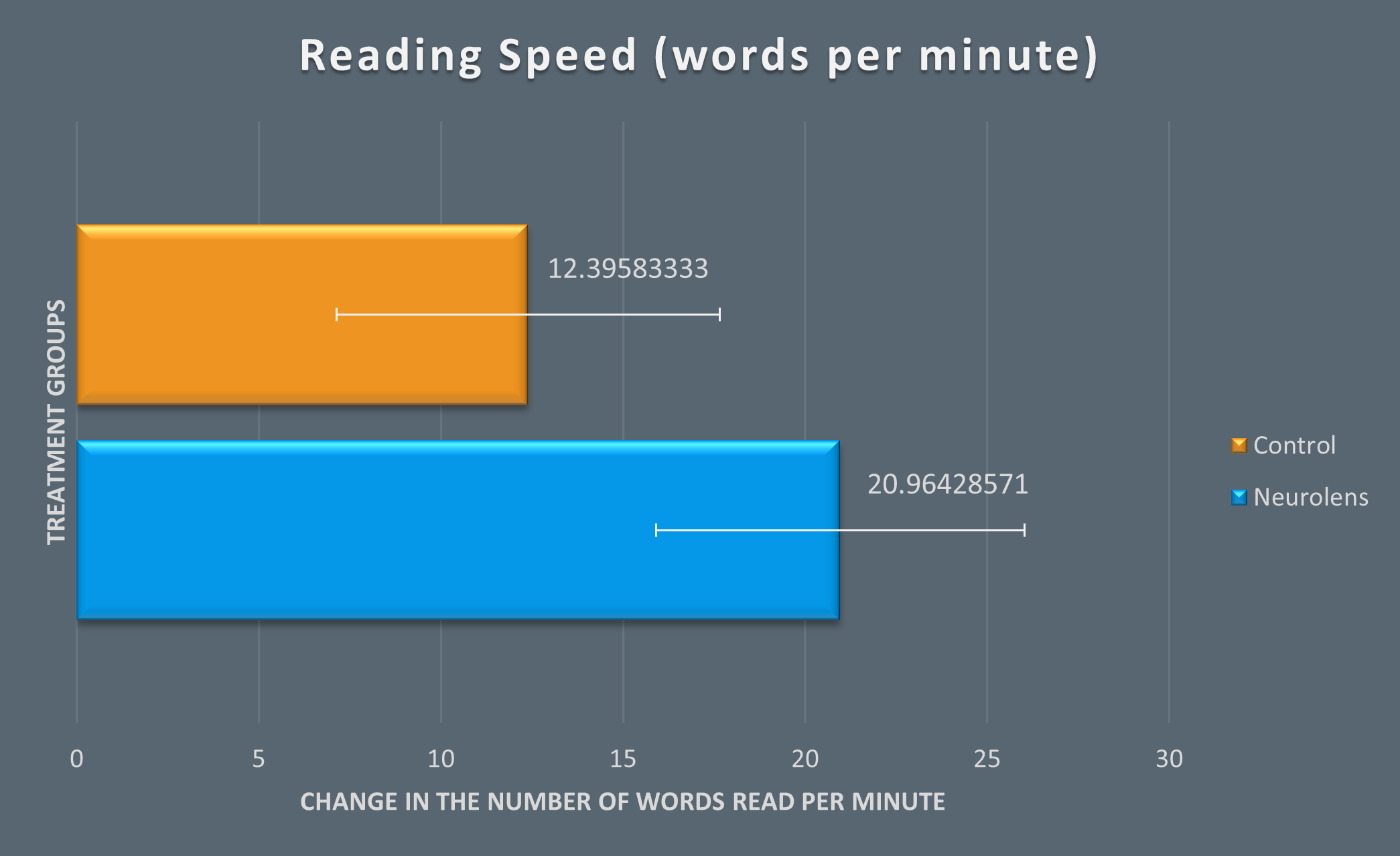 Clear and single binocular vision is essential for normal visual behavior. Our eyes’ accommodative and vergence mechanisms achieve this normal visual behavior by focusing and aligning objects of regard in the real world. Increasing screen time leads to an increased demand (stress) on these mechanisms. Mounting evidence shows this leads to a breakdown of these systems causing symptomology. The discomfort caused due to these visual disorders could ultimately affect individual’s productivity—with reading speed being a logical analog for productivity level while working or learning. This has significant economic implications, due to increased time needed to complete tasks and oversight required to keep productivity at acceptable levels.

Full digital well-being is only possible when an individual has both clear and comfortable vision. The Neurolens process helps clinicians accurately identify, measure and treat patients with DVS by not just relieving their symptoms but also by enhancing their productivity.

Posted on Mar 9, 2022 8:50:02 AM
Dr. Vivek Labhishetty answers your most frequently asked questions. What is the difference between a symptomatic and...

Posted on Feb 9, 2022 8:27:12 AM
Dr. Vivek Labhishetty answers your most frequently asked questions. How did we come up with the term “trigeminal...

Posted on Feb 3, 2022 8:37:34 AM
Binocularity and trigeminal dysphoria go hand in hand. As digital device use grows, the symptoms associated with...